About the Ojai Art Center 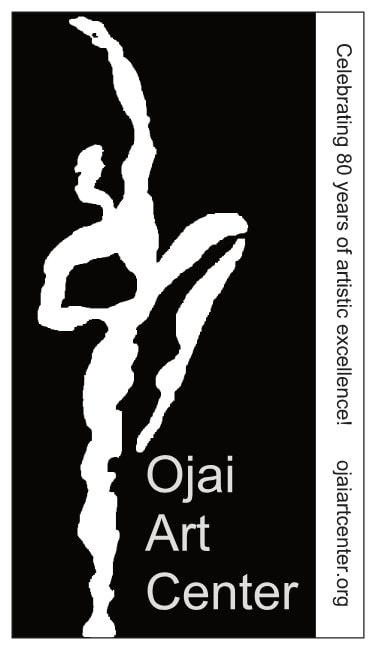 The Ojai Art Center (also known as the Ojai Center for the Arts) is the longest continuously-operating multi-disciplinary center serving the arts in the State of California.

The concept which became the Art Center was first suggested in 1936 as a means of bringing together five independent and struggling arts organizations in Ojai under one umbrella and one roof. Dr. Charles Butler, a local physician and financier, initially proposed the idea to wide acclaim, and by 1939 the Art Center was built and occupied at 113 S. Montgomery St., just half a block away from Ojai’s famed Arcade downtown shopping district.

When the Center was dedicated — as the Community Art Center of the Ojai Valley — in November 1939, Dr. Butler made opening remarks which ring true today as they have for the last 80 plus years: "You, who have made this center possible, must keep it alive, vital, and a force for good.  This is a permanent insurance policy you have written for yourselves—an insurance against the improper use of leisure time.  But all insurance, as you know, must be paid for and the premium is not only your membership dues, which we hope you will pay in proportion to your means, but also your time, your interest, your no-longer-used possessions. It is not what you can get out of this place but what you can put into it that will matter to you. For every dollar, for every ounce of energy you spend here, you will be repaid a thousand fold. We give you back what is rightfully yours. Take it, use it, enjoy it, cherish it, treat it tenderly, for much love has gone into its making."

Since those early years, the Art Center has housed a 120-seat theater, an art gallery/dance studio, meeting rooms, and open spaces which have served thousands of Ojai and area residents each year.

Currently, its Board of Directors — all volunteers — oversee the operation of the facility and its eight branches — Art, Dance, Film, Literary, Music, Photography, Theatre and Youth.  Branch activities range from six major dramatic productions each year for the Theatre Branch to monthly art exhibits by individuals and groups in the Gallery and display cases, sponsored by the Art Branch. A public reception opens each exhibit.

The Literary branch offers monthly presentations by local authors and staged readings by local actors. The Dance and Music Branches hold periodic events such as contra and folk dances and chamber music concerts. The photography branch focuses on an annual month-long exhibit featuring photographic work centered around a specific theme. The newest branch, focusing on film, collaborates with the Ojai Film Festival and the Ojai Film Society to bring film-related events to the Ojai Valley.

Most active is the Theater Branch, which presents a variety of dramatic productions, ranging from comedy to drama and musicals, annually. The branch has its own directors and monthly meetings to address all theater-related issues. A play-reading committee annually screens proposals for future productions and presents a tentative schedule for approval first by the Theater Branch and then the Center’s Board of Directors.

For each production, casting calls are issued, auditions held, plays cast, and productions staged, usually for five-week runs. Sets and costumes are created, sound and lighting are designed, props gathered — all by dedicated Ojai and local area theater-lovers, who donate hundreds of hours of time so that literally thousands of theater-lovers can enjoy the Art Center Theater’s productions every year.

In addition to Branch activities, the Center as an entity has sponsored an annual Art in the Park fundraising event, bringing together fine artists producing both 2- and 3-dimensional works, who display in Libbey Park (adjacent to the Art Center) for two days over the Memorial Day Weekend. Artists gather from all parts of the United States to display and sell their work. In addition of Art in the Park, the Center sponsors and organizes the Great Art Theft.

For past years, other Center-sponsored fundraisers has been anniversary fundraisers and concerts featuring major names in the music business — Mitzi Gaynor, Lorna Luft, Roslyn Kind, Sam Harris, and Amanda McBroom. These concerts have produced significant income for the Center annually.

Classes are also taught at the Art Center, ranging from various children’s activities and theatre classes to dance lessons. Weekly art classes focus on figure drawing; water color and open studio sessions have also been popular over the years. Physical activity classes have included belly dancing, yoga, and zumba — all provided at minimal cost to the community by experienced instructors in the Center’s rented facilities.

In addition to Art Center-sponsored events, activities, and classes, a considerable number of other local non-profit and arts-related organizations utilize the Center and its facilities for their events for example - The Ojai Film Festival headquarters its four-day event at the Art Center and uses the Theater as one venue for showing films in November.

The Art Center over the years has also collaborated with other local non-profits, co-sponsoring events with the Ojai Valley Land Conservancy, the Ojai Humane Society, the Ojai Library Foundation, and the Ojai Film Society. In all of these collaborations, the Art Center has been a good neighbor and supportive partner, enhancing the arts community in Ojai.

The Art Center operates annually on a budget of approximately $200,000, revenue is comprised of a combination of membership dues, ticket sales, facility rentals, fundraiser income, and donations. For the last several years, a Capital Campaign has been launched annually to raise money for capital improvements and to augment two endowment funds held by the Art Center.

Money raised in this way has made possible the renovations and updates essential for a 80-year-old facility: a new roof, new plumbing, upgraded electrical wiring, a new heating/air conditioning system, and insulation to enhance energy conservation.

The Endowment funds, named in honor of former Board members Helen Kauppi and Joan Raymund and begun by their families, provide funds needed to augment the Art Center income as necessary to provide for salaries, utilities, insurance, supplies, and other operational costs. As a result of these funds, the Center enjoys a stable financial situation and continues to serve the community in a myriad of ways, as outlined above.

All Art Center programs and activities are overseen by the Board and by an Executive Director, Teri Mettala, who has served the Center for more than 40 years. The only other paid positions are a part-time maintenance worker and a weekend docent. The Theater Branch provides stipends to various volunteers who assist in the production and performance of plays.

The OAC is one of Ventura County's outstanding non-profit organization. It is as vibrant and active today as it has ever been, involving and serving thousands of local citizens who are engaged, entertained, and enriched by contact with its classes, programs, activities, events, and facilities.

The Ojai Art Center’s Board of Trustees, all volunteers, oversee the operation of the facility and its eight branches:
Art, Dance, Film, Literary, Music, Photography, Theatre and Youth.

​The Board of Trustees are: Members at Large